The need for more personal space later in pregnancy

The need for more personal space later in pregnancy 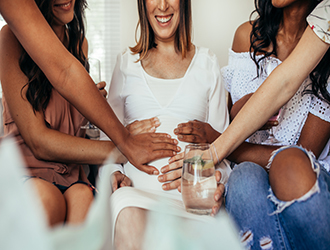 A new study confirms that pregnant women in their third trimester have a greater need for more personal space around them. Dr. Samira Tahtawi, Ob Hospitalist Group site director at WakeMed Cary Hospital in North Carolina, tells Parents.com that it is important for women to maintain the ‘protective bubble’ through the late trimester to deflect any harm to the fetus.

According to Dr. Tahtawi, in medieval times, ladies of noble rank were confined to their domestic quarters during the last month of their pregnancy and tended to by their ladies-in-waiting, servants or midwives. Dr. Tahtawi says that the dated term “estimated date of confinement” comes from this historical time. “Was this confinement to the home a safety measure? One cannot doubt that yes this was very much the case. The physical protuberance of the uterus is at risk merely by its extension so far out into the woman’s immediate physical environment,” said Dr. Tahtawi.

Having science reaffirm the peripersonal space entity to alert family, coworkers and friends that advanced gestation with its consequent physical changes does increase the vulnerability factor to the fetus is notable to Dr. Tahtawi.

Study shows that severe maternal morbidity decreased with use of OB hospitalists
Maternal Health Awareness Day – Know Why
5 reasons for hospitals to partner with Ob Hospitalist Group for obstetric services
The Obstetrics Podcast: Benefits of an OB/GYN hospitalist career out of residency
Where will you land this winter? OBHG has new OB/GYN jobs across the country!
OBHG partners with Singing River Gulfport in Gulfport, MS
Jumpstart the New Year with the Nation’s top OB hospitalist provider – Make 2023 the year for a balanced OB/GYN career
Welcome Santa Barbara Cottage Hospital in Santa Barbara, CA to the OBHG family
Video: The role of an obstetric hospitalist and how our clinicians work with private practice physicians
The 5 best obstetrics podcast episodes of 2022