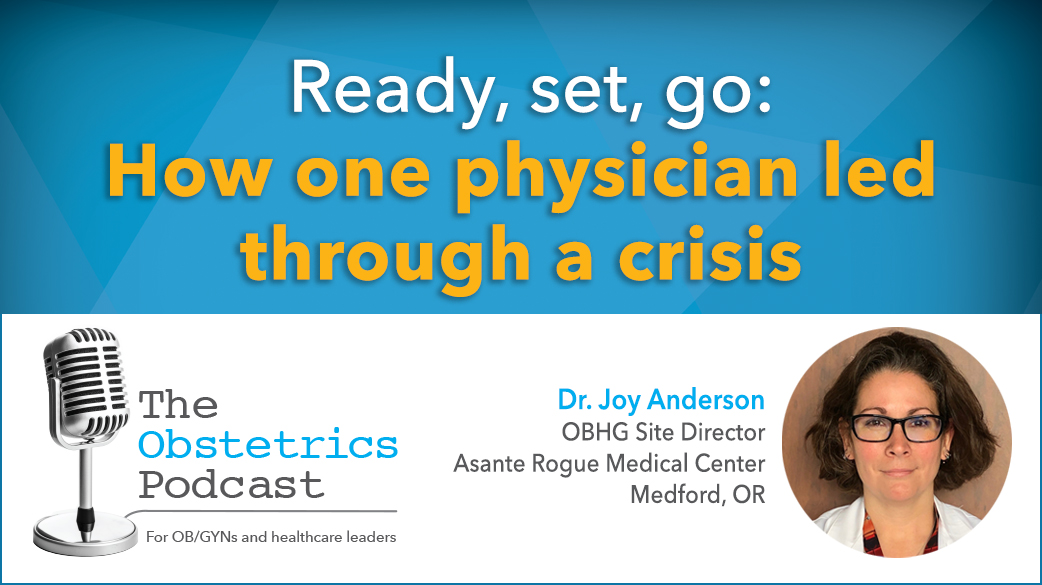 If the COVID-19 pandemic wasn’t difficult enough to deal with, September 2020 presented yet another emergency for Jackson County, Oregon. A fire swept through the area, forcing people to evacuate at a moment’s notice.

When the fire approached Asante Rogue Regional Medical Center in Medford, one physician had to think fast about how to provide care and leadership during a crisis. Dr. Joy Anderson, OB/GYN Hospitalist and Site Director at the medical center shares her experience and offers advice for other leaders placed in similar positions.

With the fire making its way through the area, Dr. Anderson turned to a former colleague, Dr. Ron Ainsworth, who had been through the Paradise Fire of 2017. “He said, ‘We’ll just take care of stuff as it needs to happen.’ So, that was our master plan. I’m a bit more of a planner myself. I worked with the nursing staff to figure out which patients needed to evacuate; which patients we could safely send home.”

Dr. Anderson and her team made a plan with the nursing staff where she would take the patients in the most active labor. She would also take on the highest risk pregnancy patients. Lower-risk patients were assigned to the nurse midwives in training.

“You do what you have to do. We had contingency plans. The nurses were super helpful throughout all of that,” notes Dr. Anderson.  “I felt like having that team behind me was just the most important thing. And I would say, I was behind them. They’re just fantastic in every single way that they work.”

Fortunately, the hospital did not have to go through with evacuation. But, what’s important is that Dr. Anderson, the staff, and hospital leadership were fully prepared to—despite the frenzy going on all around them in the community.

Dr. Anderson valued that she was able to communicate with hospital leadership, even with as much as they had on their plates. The staff also came together throughout the crisis to make sure patients felt safe and calm… at least as calm as one could be in such a situation.

“I checked in with my team, with the nursing staff, and was much more physically present. I mean, I’m always physically present. That’s what comforts me. But, I felt like I needed to touch base with everybody and be out there making patient rounds, because patients were delivering during all of this,” shares Dr. Anderson. “I think we leaned on each other; [patients] were under the same stress we were. It was scary, but we all just kind of leaned on each other and it worked out.”

She was also incredibly grateful to have Dr. Ainsworth on her side; thankful for his expertise and tranquil nature. “That man has saved some lives. He’s done some vaginal breech deliveries, which is an art and a skill that’s lost on the newer docs. I’ve watched him save babies’ lives in front of my eyes, and I was glad to have him there. He was great to have on the team at that moment.”

Throughout it all, Dr. Anderson relied on both her leadership and coping skills. “When the moments come that I’m super scared of, it helps to pretend that you’re really calm. I jokingly say I channel RuPaul, the drag queen, because it helps me. She’s a little bit tough; she’s a stoic person and she just says things how they are, which is how I want to be spoken to when there’s an emergency. I find that strangely helpful. Humor is a mature defense mechanism too. We use a lot of that in emergencies. I think that combination kind of got me through it alive.”

**Listen to an in-depth conversation on this topic with Dr. Joy Anderson, OB/GYN Hospitalist and Site Director at Asante Rogue Regional Medical Center.

The Obstetrics Podcast: Ready, Set, Go: How One Physician Led Through a Crisis

Choosing a partner for OB/GYN coverage? Top factors to consider

The Obstetrics Podcast: What it’s like to be a traveling OB/GYN

The Obstetrics Podcast: The realities of managing on-site L&D coverage

Study shows that severe maternal morbidity decreased with use of OB hospitalists
OBHG is hiring in The Palmetto State – New OB/GYN Careers in South Carolina!
Maternal Health Awareness Day – Know Why
5 reasons for hospitals to partner with Ob Hospitalist Group for obstetric services
The Obstetrics Podcast: Benefits of an OB/GYN hospitalist career out of residency
Where will you land this winter? OBHG has new OB/GYN jobs across the country!
OBHG partners with Singing River Gulfport in Gulfport, MS
Jumpstart the New Year with the Nation’s top OB hospitalist provider – Make 2023 the year for a balanced OB/GYN career
Welcome Santa Barbara Cottage Hospital in Santa Barbara, CA to the OBHG family
Video: The role of an obstetric hospitalist and how our clinicians work with private practice physicians
The 5 best obstetrics podcast episodes of 2022