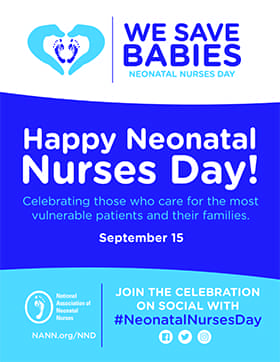 They are the ones who care for the most vulnerable newborns, those born prematurely and with low birthweight, birth defects, infection, and other medical challenges. Neonatal nurses not only need the knowledge to negotiate around tubes and precise IV dosages and monitors and incubators, but they also must have the gentlest touch to nurture and comfort both babies and their families during a difficult time. It takes a very special person to work in this field, and this week we honor neonatal nurses for their commitment, professionalism, and caring.

National Neonatal Nurses Week is celebrated every year beginning with Neonatal Nurses Day on September 15. The observance was established in 2000 by the National Association of Neonatal Nurses (NANN) as a way to celebrate all the women (and men) in their profession who provide aid and comfort every day to vulnerable newborns and their families.

Neonatal nursing is a relatively young profession that began in the 1960s after the tragic death of President John F. Kennedy’s newborn son, Patrick, from respiratory distress and under-developed lungs. Patrick was born just three weeks’ prematurely — a circumstance that is hardly life-threatening by today’s standards. Yet the baby succumbed to respiratory distress syndrome (RDS), because his premature lungs did not produce an important protein- based coating that prevents the collapse of small air sacs in the lung. The March of Dimes estimates that more than 16,000 premature infants suffer from RDS in the United States each year. Today, 95% of these preemies survive RDS. Patrick’s death put the national spotlight on saving premature babies and led to the development of the modern Neonatal Intensive Care Unit (NICU).

A NICU nurse spends more time at the baby’s bedside than most of the healthcare team and cares for the tiny patient usually until discharge. Today infants born as early as 25 weeks are surviving more often because of technological and medical advances and because of the acute skills and expertise of NICU nurses and physicians.

The Obstetrics Podcast: Hospital moves from reactionary to safer obstetric care
VIDEO: Delivering life-saving care – Dr. Armida Moreno treats patient with postpartum hemorrhage
OBHG partners with The Medical Center of Bowling Green in Bowling Green, KY
OBHG is hiring in The Palmetto State – New OB/GYN Careers in South Carolina!
Study shows that severe maternal morbidity decreased with use of OB hospitalists
Maternal Health Awareness Day – Know Why
5 reasons for hospitals to partner with Ob Hospitalist Group for obstetric services
The Obstetrics Podcast: Benefits of an OB/GYN hospitalist career out of residency
Where will you land this winter? OBHG has new OB/GYN jobs across the country!
OBHG partners with Singing River Gulfport in Gulfport, MS
Jumpstart the New Year with the Nation’s top OB hospitalist provider – Make 2023 the year for a balanced OB/GYN career
Welcome Santa Barbara Cottage Hospital in Santa Barbara, CA to the OBHG family
Video: The role of an obstetric hospitalist and how our clinicians work with private practice physicians
The 5 best obstetrics podcast episodes of 2022