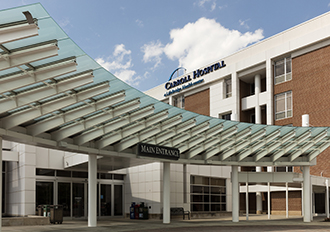 As OB hospitalist programs become the standard of care across the country, many hospitals are enticed to save money by running the program themselves. As one hospital CMO found, this approach may ultimately cost more in administration fees, locums utilization and physician satisfaction.

Carroll Hospital Center previously managed OB/GYN services with employed physicians and midwives who worked in both the inpatient and outpatient settings and provided 24/7 labor and delivery coverage.

“The problem was that we were trying to run too many different specialties and didn't really have the expertise or the flexibility to run them all really well,” said Dr. Mark Olszyk, chief medical officer and vice president of medical affairs at Carroll. “OB/GYN ran a net loss year after year, we had a lot of turnover and we had another outpatient group in our community which was doing really well, so a lot of our providers left to work for them.”

Dr. Olszyk, who has been at Carroll for more than five years, is responsible for hospital providers and for helping to establish and enforce the standards of the medical staff.

“We were trying to do a lot of things,” said Dr. Olszyk. “A lot of our departments are very small, so they are subject to natural and artificial forces, and it was very hard to cover last-minute for call when we only had two or three physicians employed and a number of locums and PRNs. We were constantly scrambling and had problems with coverage since everyone was in a constant state of contract negotiation.”

Hospital leadership discussed some solutions with the outpatient group’s physicians, and several of them suggested Ob Hospitalist Group (OBHG).

“We heard OBHG was somehow able to make a living in this very difficult niche, and we called them to start some initial discussions,” said Dr. Olszyk. “We were very happy with what we heard during the presentations and OBHG’s leadership was very accommodating and transparent and they gave us a lot of attention.”

In November 2018, the partnership between Carroll and OBHG was up and running. The three hospital-employed OB/GYNS found jobs with OBHG and two other hospitalists joined the team.

“Before, OB/GYN was one of the departments that was constantly coming to my attention for various reasons, but it has been a dream,” said Dr. Olszyk. “I have not heard one single behavioral complaint, and I have not had one scheduling problem. The nurses, patients, outpatient physicians and the hospitalists are all happy.”

According to Dr. Olszyk, even though OBHG’s program costs a little more than running an OB hospitalist program themselves, the cost would be the same or less because they avoid locums and recruiting expenses and last-minute coverage issues, which reduces their risk.

“We really avoid a lot of the risk which is difficult to put a hard-and-fast number on,” he said. “In doing a risks-benefits analysis, you can see that having increased stability, reliability and standardization really begins to pay for itself. If we lost one provider, we would be in a really hard place, and I wanted to amortize our risk to somebody else.”

Dr. Olszyk recognizes that many hospital leaders may get some pushback about the cost of an OBHG program, but he believes the benefits outweigh the cost.

Since partnering with OBHG, Dr. Olszyk and his team have enjoyed full-time, stress-free L&D coverage and streamlined collaboration with the outpatient OB/GYN group.

“For me, it was a pretty easy proposition,” he said. “Since the go-live date, the partnership has been smooth as silk. I even forget which day we turned over because it was so smooth.”

OBHG partners with The Medical Center of Bowling Green in Bowling Green, KY
OBHG is hiring in The Palmetto State – New OB/GYN Careers in South Carolina!
Study shows that severe maternal morbidity decreased with use of OB hospitalists
Maternal Health Awareness Day – Know Why
5 reasons for hospitals to partner with Ob Hospitalist Group for obstetric services
The Obstetrics Podcast: Benefits of an OB/GYN hospitalist career out of residency
Where will you land this winter? OBHG has new OB/GYN jobs across the country!
OBHG partners with Singing River Gulfport in Gulfport, MS
Jumpstart the New Year with the Nation’s top OB hospitalist provider – Make 2023 the year for a balanced OB/GYN career
Welcome Santa Barbara Cottage Hospital in Santa Barbara, CA to the OBHG family
Video: The role of an obstetric hospitalist and how our clinicians work with private practice physicians
The 5 best obstetrics podcast episodes of 2022